Though they take place off-campus, the College’s study abroad programs are as much a part of the Dartmouth experience as a late night in Baker-Berry Library or a spring afternoon on the Green. According to a recent report from the Institute of International Education, Dartmouth is a top ten institution in the country for study abroad, with 60 percent of students participating. Dartmouth currently has more than 40 language and non-language programs, all of which are part of the College curriculum and are led by Dartmouth faculty. 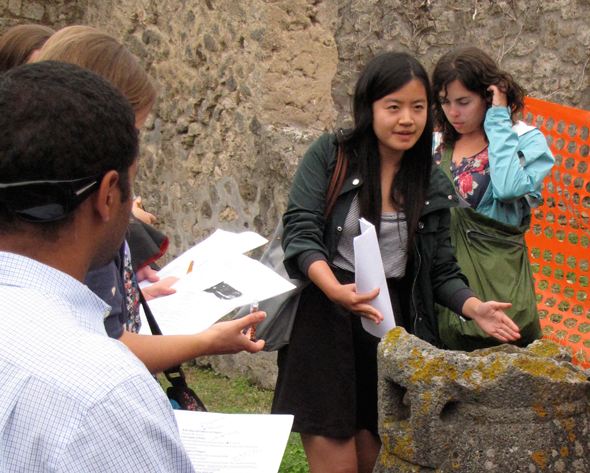 Chelsea Suydam ’14, who is currently on the Italian Language Study Abroad (LSA) program in Rome, said she dreamed of studying abroad when she was in high school, but she didn’t know if it would ever be possible.

“After I came to Dartmouth I began to realize how amazing its study abroad programs are, and how so many students have taken advantage of them,” she says. “I couldn't miss this opportunity.” In addition to practicing her Italian, Suydam says she’s enjoying studying the artistic history of Rome and Florence.

John Tansey, executive director of Off-Campus Programs, says the flexibility of the D-Plan (Dartmouth’s year-round academic calendar), the availability of financial aid, and credits that transfer automatically make it straightforward for students to study abroad. Also, Tansey notes, “Dartmouth faculty members from departments across campus—from biological sciences to Spanish and Portuguese—are involved in the design and leadership of the programs. They share their enthusiasm with students.” 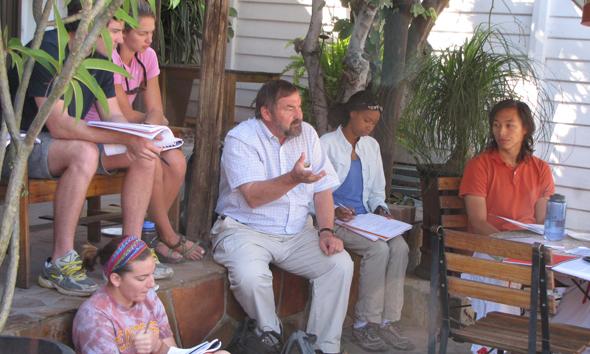 Professor Bill Roebuck, director of the environmental studies FSP, delivers a morning lecture to Dartmouth students outside a hostel in Windhoek, Namibia. About half the time on the program, which takes place every fall, is spent in the field. (photo by John Tansey)

The programs, which are currently on six continents, are constantly evolving. (See a complete list.) The most recently developed is a film and media studies Foreign Study Abroad program (FSP) to Edinburgh, Scotland. A pilot version of the program will launch in summer 2012.

In addition to introducing students to new cultures and worldviews, study abroad can specifically influence a student’s approach to a discipline.

During her classes at Dartmouth, government major Christine Garcia ’13 has focused on the political development of countries including Latin America. But on the government Foreign Study Program (FSP) in London, she says, “My favorite experience has been taking international relations classes with Professor Christopher Coker at the London School of Economics. It has made me think about the different ideas of warfare and insurgency tactics and how that ties into my own studies. It worked perfectly for my final paper.”

It’s no secret that study abroad entails additional expenses, such as plane tickets and excursions. In many cases, Dartmouth’s strong financial aid program means that the cost of a term abroad is the same as one on campus.

Additionally, thanks to family, classmates, and friends of the late Rick Angulo ’77, seven students are selected annually to receive the Rick Angulo World Experience Award to help cover travel costs. This fall term Christine Garcia ’13 and Chelsea Suydam '14 are the 99th and 100th recipients of the $1,500 award, respectively.

“The award is given on behalf of the late Rick Angulo ’77, who was fluent in four languages, president of his class, and an avid fan of athletics,” says Off-Campus Programs Director John Tansey. “It continues to mean a lot to Rick's parents, Dr. and Mrs. Ricardo Angulo, and all of us associated with Off-Campus Programs.”

In October 2011, Professor Lynn Higgins, who oversees study abroad in her role as associate dean for international and interdisciplinary studies, visited four programs in Italy and one Southern Africa. In Pompeii, on the classics FSP, Higgins watched students deliver presentations at an archaeological site, and in Namibia, on the environmental studies FSP, she joined students in learning about the social and economic dimensions of protecting cheetahs.

“I’ve led my share of programs (15 in France and Morocco), but I’ve never observed them in this role, and what’s really struck me as the greatest strength is that each program is designed for the geographic location and academic department—there’s no one-size-fits all program. They are distilled versions of Dartmouth’s teacher/scholar model, with professors and students researching and learning together, often with direct access to primary source information. They are really stunning to watch.”